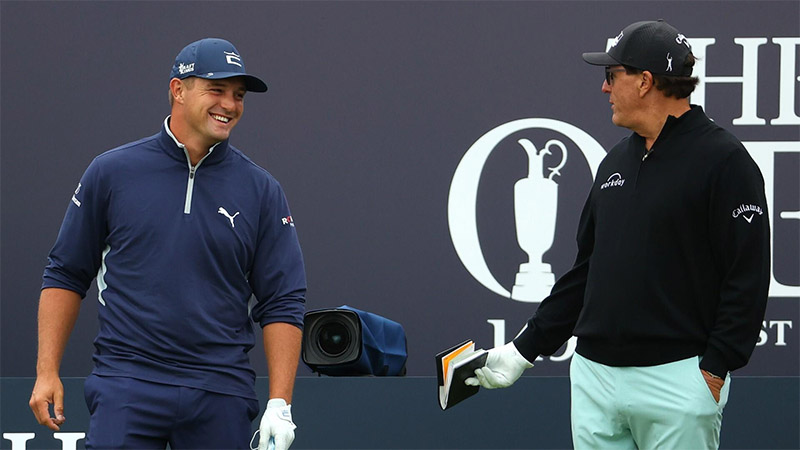 Phil Mickelson and Ian Poulter are among 11 LIV Golf players who have filed a lawsuit against the PGA Tour in order to challenge their suspensions.

The PGA Tour has suspended all of its members who have signed up to the controversial Saudi-backed LIV series, which is in its inaugural season.

The 2020 US Open champion Bryson DeChambeau has also put his name to the anti-trust lawsuit.

The group argue that the PGA Tour is trying to harm their careers.

“The Tour’s conduct serves no purpose other than to cause harm to players and foreclose the entry of the first meaningful competitive threat the Tour has faced in decades,” the lawsuit states.

“The purpose of this action is to strike down the PGA Tour’s anti-competitive rules and practices that prevent these independent-contractor golfers from playing when and where they choose.”

In a letter responding to the lawsuit that was sent to PGA Tour members, commissioner Jay Monahan said the organisation would not back down.

“These suspended players – who are now Saudi Golf League employees – have walked away from the Tour and now want back in,” he said.

“It’s an attempt to use the Tour platform to promote themselves and to freeride on your benefits and efforts.

“To allow re-entry into our events compromises the Tour and the competition, to the detriment of our organisation, our players, our partners and our fans.

“The lawsuit they have filed somehow expects us to believe the opposite, which is why we intend to make our case clearly and vigorously.”

The PGA Tour suspended those who joined up with the breakaway series in June, though those players were still able to compete at the subsequent US Open and last month’s Open Championship.

Six-time major winner Mickelson and other major champions including Dustin Johnson, Brooks Koepka, Patrick Reed and Sergio Garcia were among those suspended.

Poulter was also suspended by the the European-based DP World Tour after they followed the PGA Tour’s lead.

That move prompted 16 players to threaten legal action if the bans were upheld and Poulter was able to compete at the Scottish Open after his ban was lifted pending a full appeal.

Gooch, Swafford and Jones are requesting temporary relief to allow them to compete in the FedEx Cup play-offs, which start next week.