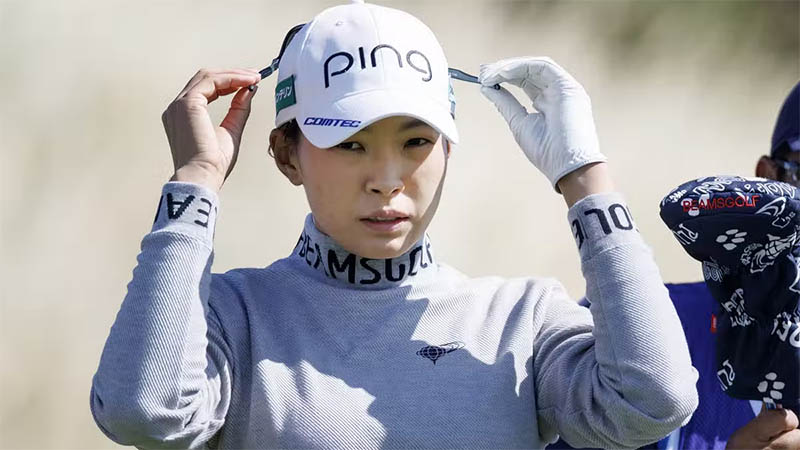 Japan’s Hinako Shibuno made a flying start at the AIG Women’s Open before claiming a one-shot lead after the first round at Muirfield.

Shibuno, the 2019 champion, had birdies on the first three holes before carding eight in total for a six-under 65.

Jessica Korda hit a 66, while Scotland’s Louise Duncan and Mexico’s Gaby Lopez are a further stroke back.

“It has been a long time since I’ve played this well, especially putting,” said Shibuno, 23.

Jodi Ewart Shadoff led England’s hopefuls as her three-under 68 put her in the top five, while 2018 champion Georgia Hall is five shots off the pace after a 70 and Charley Hull finished on level par in a group including Alice Hewson and Ireland’s Leona Maguire.

American Korda recovered from an early bogey to record four birdies and an eagle on the 17th, despite having to play in borrowed clothes as her luggage had failed to arrive in Scotland.

“If anyone knows anyone at the Zurich airport that would like to put my suitcase on the one flight a day that they have coming into Edinburgh, I’d deeply appreciate it,” said the world number 14.

Playing in the first group at 06:30 BST alongside former champion and local resident Catriona Matthew, Duncan also recorded an eagle on the 17th. Four birdies and two bogeys matched her score from the opening round at Carnoustie 12 months ago – when she finished 10th while still an amateur.

The 22-year-old only made her professional debut in last week’s Women’s Scottish Open, missing the cut.

“I think the key is I didn’t take it too seriously,” said Duncan. ” I just went out and enjoyed my warm-up.

“I haven’t had a paycheck and still feel like I’m an amateur. I’m rolling with the punches and we’ll see where it takes me.”

Two-time Solheim Cup captain Matthew, 52, struggled to a five-over-par 76, making double bogeys on the first and 10th and failing to make a single birdie.