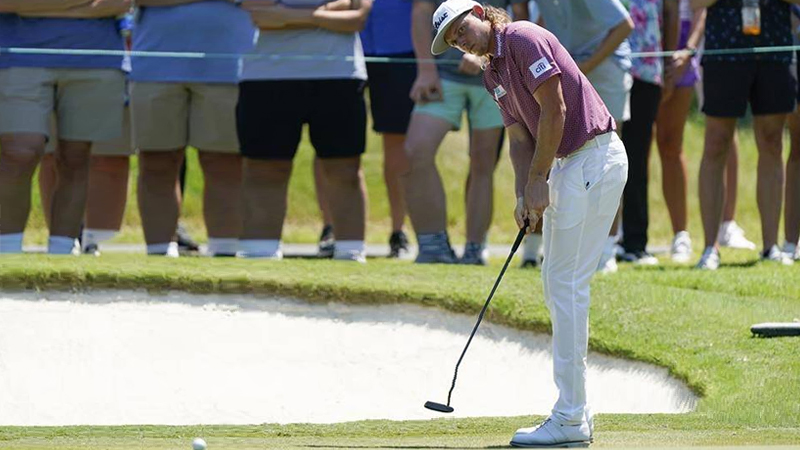 Australian praised for his reaction after two-shot penalty in Memphis

World No 2 penalised for playing from the wrong place

Cameron Smith is being hailed for his sportsmanship after the Australian was handed a two-stroke penalty that scuppered his hopes of winning the FedEx St Jude Championship and claiming golf’s world No 1 ranking.

In a major setback before even teeing off for Sunday’s final round in Memphis, Smith was slugged with the penalty for playing from the wrong place on the fourth hole on Saturday.

The world No 2 took a drop after hooking his ball into the water off the tee on the par-3 and incorrectly played his third shot with his ball touching the red hazard line. Instead of starting two shots off the lead, Smith’s three-under-par 67 was adjusted to a 69 and left him four behind JJ Spaun in a tie for 14th at nine under.

The wind out of his sails, Smith closed with a labouring even-par 70, never really looking like being a factor down the stretch as American Will Zalatoris edged out Austrian Sepp Straka on the third hole of a dramatic sudden-death playoff to claim his maiden PGA Tour win.

Although officials had seen Smith’s incident on Saturday, they felt comfortable that he would have known he was not allowed to play a ball that was touching a hazard line and assumed it wasn’t. Chief referee Gary Young, calling it a “crazy, unfortunate situation”, said it wasn’t until another committee member saw a TV replay on Sunday that officials decided to investigate further and to speak with Smith.

Young said “because of the geometry of the situation he [Smith] was dealing with a really small area where he’s dropping it”. “It’s basically hole high and he’s basically got a slither outside of the line and he obviously dropped the ball in that area but it came back to rest against the line.

“It was at that point he obviously thought it was OK to play it from the position and it turns out the rules do not [allow it]. You have to take complete relief from that penalty area. He wasn’t aware that no portion of the ball could be touching the penalty area line. He thought that if a portion of the ball was in the general area of the course he was safe to play it.”

Smith, who won the Players Championship in March and his first major title at last month’s 150th Open at St Andrews, would have supplanted Scottie Scheffler as world No 1 if he won the St Jude after the American missed the halfway cut at the opening event of the PGA Tour’s FedExCup playoffs. Despite the high stakes, Young said Smith accepted his penalty with grace and class.

“Cam is a complete gentleman and he took it that way,” the referee said. “He was completely calm through the whole process and once he found out it was a two-stroke penalty, he said to me, ‘the rules are the rules’. In typical, casual Cam fashion, he just accepted it and left the office that way.”