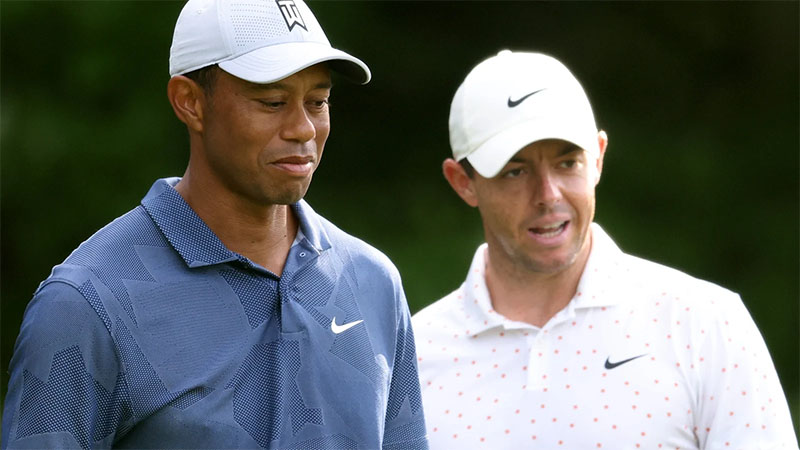 Tiger Woods flew to Wilmington for a private meeting of top players to discuss the threat of the Saudi-funded breakaway ahead of the BMW Championship; “His voice carries further than anyone else’s in the game of golf,” Rory McIlroy said about Woods

Woods flew to Wilmington on Tuesday for a private meeting of top players to discuss the threat of the Saudi-funded breakaway ahead of the BMW Championship.

The 15-time major winner had not qualified for the second FedEx Cup play-off event after playing just three times in 2022 following the car accident in February 2021 which almost resulted in his right leg being amputated.

Players in the meeting were reluctant to divulge details of what was discussed, but McIlroy said: “I think the one thing that came out of it, which I think was the purpose, is all the top players on this Tour are in agreement and alignment of where we should go going forward, and that was awesome.

“We need to get the top guys together more often than we do.”

Asked about the presence of Woods, who made the journey from his home in Florida alongside Rickie Fowler, McIlroy added: “It’s impactful and I think it shows how much he cares about the Tour.

“I think it shows how much he cares about the players that are coming through and are going to be the next generation.

“Like it or not, they can’t really sell Tiger Woods anymore. The Tour had an easy job for 20 years. They don’t have Tiger – yes, they’ve got a bunch of us and we’re all great players, but we’re not Tiger Woods. We’re moving into a different era, and we just have to think about things a little differently.

“He is the hero that we’ve all looked up to. His voice carries further than anyone else’s in the game of golf. His role is navigating us to a place where we all think we should be.

“I think it’s pretty apparent that whenever we all get in the room there’s an alpha in there, and it’s not me.”

McIlroy missed the cut in the first play-off event in Memphis last week but has turned that to his advantage by undertaking extensive preparations at Wilmington Country Club, where the top 30 in the FedEx Cup standings on Sunday will advance to the Tour Championship.

“It’s a good golf course,” McIlroy added. “It’s a golf course that is a little more up my alley compared to say last week in Memphis.

“I was a little rusty last week as well, but a lot more drivers off the tee [here], a lot of room off the tee. Length is an advantage here, where in Memphis it’s not really. Just my sort of golf course that I feel like I can excel on.

“I got here Friday night after the missed cut and I’ve been on the course every day since Saturday. It’s nice to get back out and prepare and get to know a new golf course, get a little bit of a head start on everyone else.

“My family are in upstate New York at their cabin, if I went there I wouldn’t have been practicing or playing, and the one thing I needed to do was practice and play.”