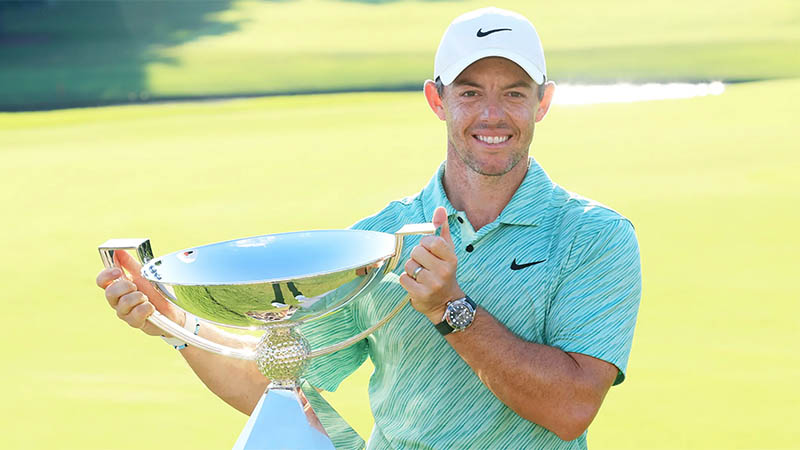 McIlroy carded a four-under 66 to end the week on 21 under and a shot clear of Sungjae Im and Scheffler, who threw away a six-shot advantage after a final-round 73; FedExCup victory earns McIlroy $18m (£15.3m) and follows successes in 2016 and 2019

Rory McIlroy became the first three-time winner in FedExCup history after coming through a final-round tussle with world No 1 Scottie Scheffler to claim a dramatic victory at the Tour Championship.

McIlroy came into the PGA Tour’s season finale six strokes back and fell further behind with a triple-bogey on his opening hole on Thursday, although battled back to follow successive 67s with a third-round 63 to stay within six shots of Scheffler.

Scheffler’s convincing advantage evaporated after three bogeys in his opening six holes, as McIlroy pulled level with four birdies in a five-hole stretch, although the Masters champion retained at least a share of the lead until McIlroy edged ahead with three holes remaining.

The four-time major winner then closed out a four-under 66 to end the week on 21 under at East Lake Golf Club and a shot clear of both Sungjae Im and Scheffler, who stuttered to a three-over 73, with Xander Schauffele three strokes back in fourth spot.

Scheffler resumed his third round one ahead but birdied four of his final six holes to open a six-shot advantage, while McIlroy returned early on Sunday morning to birdie the final two holes to ensure a final-round pairing with the world No 1.

Both players bogeyed the par-four first, with Scheffler three-putting from long-range to see his lead cut to five, while McIlroy responded with a birdie at the third and Im – playing in the group ahead – posting back-to-back birdies to halve Scheffler’s pre-round advantage.

Scheffler followed a bogey at the fourth by failing to get up and down from the sand to save par at the sixth, as McIlroy birdied both holes and added another from 17 feet at the seventh to lift him temporarily into a share of the lead.

A close-range birdie at the eighth was enough for Scheffler to edge back ahead until McIlroy rolled in from eight feet at the 12th to get to 20 under, with Im a shot off the pace after cancelling out a bogey at the eighth by picking up a shot at the par-three next and birdieing the 12th.

Scheffler converted from 12 feet to save par at the 12th and scrambled from the rough to avoid a bogey at the next, as McIlroy bounced back from a careless bogey at the 14th to drain a 30-footer at the next to leave the pair locked together with three to play.

McIlroy hit the pin with a chip from the back of the 16th green and poured in from eight feet to save par, which was enough for the solo lead when Scheffler did not get up and down from the sand, while Im recovered from a double-bogey at the 14th to birdie the 15th and 17th to get within one.

Scheffler missed a 10-foot birdie chance at the 17th and was unable to take advantage of the par-five last, allowing McIlroy to secure a third FedExCup title and claim the $18m (£15.3m) first prize with a tap-in par.

“To be the first to do anything in the game that you love so much, it’s an incredibly proud moment,” McIlroy said. “I got a little lucky with Scottie (Scheffler) not playing his best golf today, and I took advantage of that with my good play. I went up against the best player in the world today and I took him down, and that’s got to mean something.”

Im matched McIlroy’s 66 to share second with Scheffler, while Schauffele, who began the day one off the lead, had to settle for fourth after completing a third-round 70 then posting a one-under 69 in the final round.

Max Homa and Justin Thomas shared fifth spot on 17 under ahead of Sepp Straka and last year’s FedExCup champion Patrick Cantlay, with Tony Finau and Tom Hoge rounding off the top 10 and US Open champion Matt Fitzpatrick in a share of 11th.

Adam Scott confirmed that he will not join LIV Golf