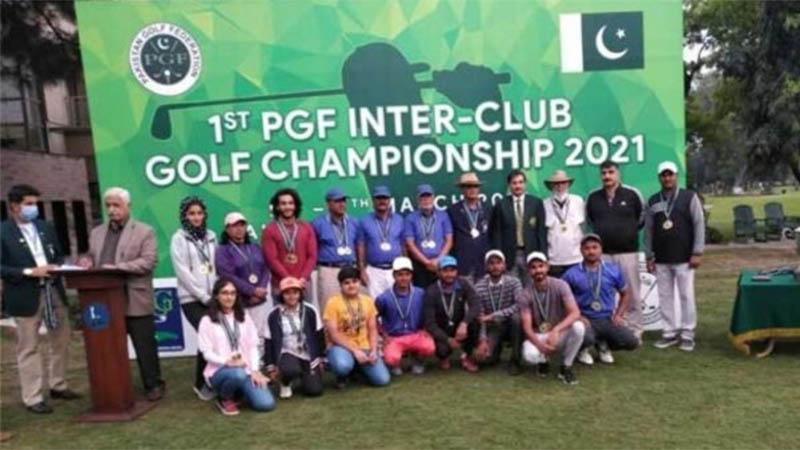 Lahore Garrison Greens Team achieved victory in the PGA Inter-Club Golf Championship by aggregating a team score of 2,342 and were declared the Punjab Province Club Champions for 2022.

The event was organized by Punjab Golf Association (PGA) that was concluded here at the Lahore Gymkhana Golf Course on Sunday. The runners-up were Defence Raya with a team score of 2,403 and lost to Lahore Garrison by a margin of 61 strokes. Flow of competitive play in the two rounds of this championship was aligned by the Lahore Garrison Team players in a way that they appeared as the dominant ones in this encounter of glory and achievement.

Aggregate wise, the Lahore Garrison amateurs, Damil Ataullah, Ahmed Sultan Kayani, Nouman Ilyas and Capt Zainurrehman, managed a team score of 461, which was similar to the score achieved by Gymkhana amateurs while Defence Raya had a score of 485 and Rawalpindi had 504. As for the contribution by senior amateurs, Col Ikram, Tariq Mehmood, Col M Shafi and Col Raja Asif Mehdi of Lahore Garrison, their aggregate score was 488 while Rawalpindi seniors aggregated 493, Gymkhana seniors aggregated 518 and Raya compiled 541.

As for ladies, the team members of Lahore Garrison, Suneya Osama, Zahida Durrani and Ghazala Yasmin, aggregated 322 as against 368 by Defence Raya, 407 by Gymkhana and 407 also by Rawalpindi. In this way, the efforts of the Lahore Garrison amateurs, senior amateurs and ladies lent a huge advantage to their quest for honors by providing huge strokes advantage over the other competing teams. At the conclusion of PGA Inter Club Golf Competition, former Punjab Golf Association (PGA) Secretary Brig (R) Shahid Wahab Rao handed over the champion team trophy to Garrison Golf Team and their captain Col (R) Asif Mehdi plus a winner’s cheque of Rs 500,000 and gold medals to team members. The grand ceremony was attended by Dr Asma Shami, Minaa Zainab, Executive Committee of PGA, Muhammed Zakir of PGA and participating players.