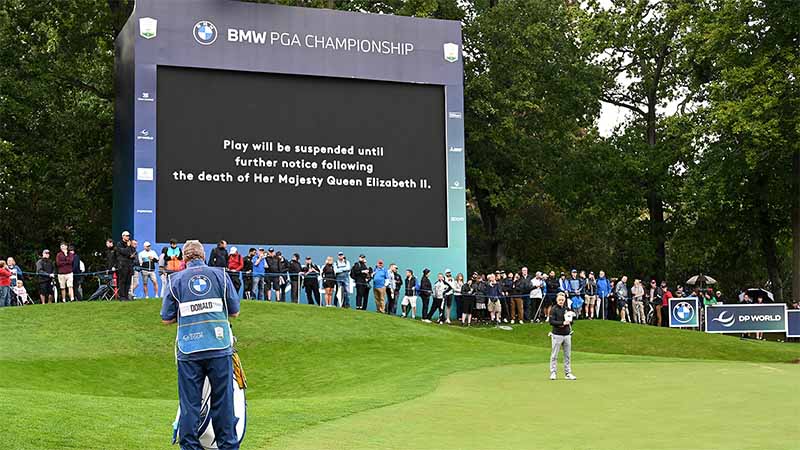 As the world stops to mourn Queen Elizabeth II’s loss, so, too, will professional golf.

“Out of respect for Her Majesty and the Royal Family, play has been suspended at the BMW PGA Championship at Wentworth Club for the remainder of Thursday and flags at Wentworth Club will be lowered to half-mast,” a statement from the Tour reads. “Furthermore, no play will take place at the BMW PGA Championship on Friday and the golf course and practice facilities will be closed.”

The news of Elizabeth II’s death shocked much of the country, which learned only hours earlier that doctors were concerned about her health after placing her under “medical supervision.” Most Brits cannot remember a time before her reign as Queen, which began in 1952 and has served as part of the bedrock of the country through a turbulent half-century. Services for Elizabeth II are expected to last several days and will be staged across the whole of Britain, with a particular emphasis on London, where it is expected she will be laid to rest.

It is not yet known what the period of mourning will mean for BMW PGA, or if organizers will consider the extraordinary step of canceling the tournament outright. Updates about the resumption of play, the tour said, “will be provided in due course.” Wentworth Club, the tournament host, is in Surrey, England, just an hour’s drive outside of London.

It has been an eventful week already at the BMW PGA, a DP World Tour event that marks the controversial first gathering of both LIV and PGA Tour players at an tournament with some Tour affiliation (the PGA Tour and DP World Tour are “strategic partners,” and the PGA Tour owns a stake of the DP World Tour’s media apparatus). LIV competitors sued in British court to earn entrance into the event, winning a stay that allows them to compete on the DP World Tour until a judge rules more broadly on the topic of tournament bans. The legal victory allows LIV players to earn vital world ranking points by competing at the BMW PGA, which help to determine major championship eligibility.

“Even though Lee Westwood and Ian Poulter have been stalwarts for the European Tour, I don’t think those guys really should be here,” Billy Horschel said. “I honestly don’t think that the American guys who haven’t supported the PGA Tour should be here. Abraham Ancer, Talor Gooch, Jason Kokrak — you’ve never played this tournament, you’ve never supported the DP World Tour. Why are you here?”

Horschel was later spotted having a testy exchange with LIV competitor Ian Poulter on the practice green, presumably sharing a similar sentiment. But he wasn’t the only one to voice his criticism of the upstart league in his pre-tournament presser.

“They shouldn’t be here, but again that’s just my opinion,” said Rory McIlroy. “I’ll be trying to win a golf tournament regardless. They are going to be pretty tired on Sunday; it will be the fourth day.”

“I’m not going to name anybody, but the only reason they are here is for world ranking points, hoping they can finish in the top 50 to then play certain majors,” Jon Rahm agreed. “It’s clear as day. And if they are saying otherwise they are not fooling anybody, at least not me.”

Of course, those arguments remain dependent on the tournament reaching its conclusion, which was originally scheduled for Sunday.