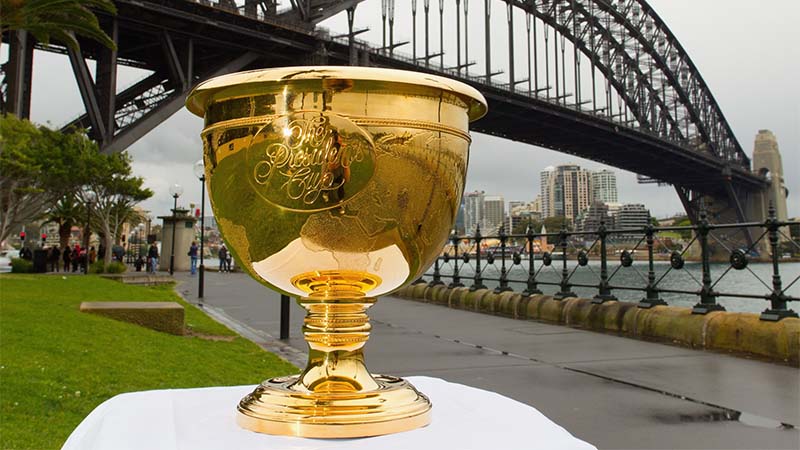 The United States defend the Presidents Cup at Quail Hollow this week in a match that has, indisputably, been affected by the advent of the breakaway LIV tour.

Trevor Immelman’s International side (the rest of the world outside Europe and US) are chasing what would be only their second win since the cup’s inception in 1994.

Ordinarily they might have been an attractive bet, had the likes of Open champion Cameron Smith, the exciting Chilean Joaquin Niemann and Mexico’s Abraham Ancer been available for selection.

But all three have moved to Greg Norman’s Saudi Arabian-funded start-up and with the Presidents Cup being a PGA Tour event, they are no longer welcome. Add to that list Louis Oosthuizen, Marc Leishman and Branden Grace.

The US are also missing big hitters. Dustin Johnson, who won all five matches at the last Ryder Cup, is on the ineligible roster along with Brooks Koepka and Bryson DeChambeau, but the effect on Davis Love III’s team is less marked.

“Trevor’s problem is his first 12 was really good and the second 12 was maybe not quite as good. We have always had the depth.”

Five of Immelman’s six wildcard picks are rookies, among eight debutants in the International team. There is no hiding the arrival of LIV has taken a heavy toll.

“LIV has been challenging, there’s no doubt about it,” Immelman told Golf.com. “But there’s not too much I can do about it.

“These players need to make their minds up and decide what’s best for them and their future. You have players who left, and I absolutely respect that.

Love, an outspoken LIV critic who has raised the prospect of players striking at future majors if they allow so called rebels to continue playing, does not hide his fury.

“The Presidents Cup is just one tournament on the PGA Tour that these guys (who joined LIV Golf) are taking a chance on never getting to play again,” the captain told the Charlotte Observer.

“So that’s both heart-wrenching, disappointing and sometimes infuriating that we’re having to deal with this…. It’s just very sad for the game.”

Love is an ardent PGA Tour loyalist and disputes LIV’s continuing claims to be a force for good in golf. “They want all the tours and the NCAA and amateur golf to feed them stars for their little select league,” Love added.

“And that’s their first priority. They want to be the number one league, which is a great goal. But it’s not going to be good for the game if the PGA Tour and the DP World Tour are relegated to feeder tours for the LIV Golf tour.”

Some observers believe matches such as the Presidents Cup should rise above a dispute that is tearing apart men’s professional golf and allow both teams to field their strongest teams.

Indeed, Smith was still expressing his desire to play in this week’s match earlier in the summer, even when he knew he was destined to make his big money move to LIV. Oosthuizen, the 2010 Open champion, is another feeling disappointed to be missing out on an event he has played on every occasion since his 2013 debut.

“I didn’t think I did anything wrong,” the South African, who resigned from the PGA Tour before joining LIV, told Sports Illustrated.

“I made my decision where I am playing golf. But I didn’t do anything wrong while I was a PGA Tour member.

“It’s always been one of my favourite weeks of the year. It’s a bit of a punch in the gut not to be able to play. More so, not being able to be one of the players who is with a South African captain.”

Fans will hope the contest is close enough to become a spectacle that can rise above then current politicking. This 14th edition is the first in three years and follows a narrow 16-14 US away win in 2019.

The homes side shows five changes from the team that thrashed Europe 19-9 in last year’s Ryder Cup. Along with the LIV defectors Johnson, DeChambeau and Koepka there is no room for Daniel Berger or Harris English.

Max Homa, last Sunday’s extraordinary winner of the Fortinet Championship is determined to justify his inclusion. Despite four PGA Tour wins in the last 19 months, he says he will be “playing with a chip on my shoulder”.

Major winners Collin Morikawa and Scottie Scheffler are making Presidents Cup debuts along with Sam Burns, Billy Horschel and Open Championship runner up Cameron Young. Averaging 29.6 years old, it is the youngest ever US team.

But the Internationals average almost a year younger, with 42-year-old Adam Scott the old man of the contest. Much will depend on the Australian and another Masters winner Hideki Matsuyama in such a youthful line up.

Japan’s Matsuyama has decent Quail Hollow memories after finishing tied fifth there at the 2017 US PGA Championship and has so far resisted highly lucrative LIV overtures.

Tom Kim, a 20-year-old South Korean who has risen to 22 in the world, is a potentially thrilling addition but Immelman will need to coax him in the way European Ryder Cup captains used to inspire lesser lights to greatness within a collective cause.

Can the likes of Christiaan Bezuidenhuot, Corey Conners, Sungjae Im and US PGA Championship runner up Mito Perreira find an extra level to trouble an inevitably strong US side?

If they do, then for a few days at least, the golf will emerge from the giant shadow LIV has cast over the build up to this Presidents Cup.