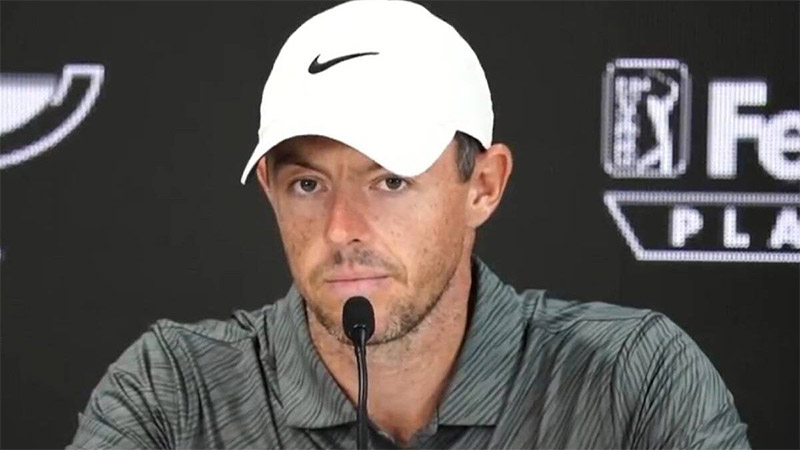 Rory McIlroy has called on LIV golfers to take a leading role in mending the fractured relationship between the sport’s rivalling tours.

The four-time major winner has been one of the most outspoken critics of the Saudi-funded series.

“I would just say the ball is in their court,” McIlroy told BBC Sport.

“If they want to come to the table and try to play nicely within the sandbox that’s already created, the opportunity is there.”

Since the new series launched in June, tensions have been high between LIV and the established PGA and European Tours.

Three players and LIV Golf are proceeding with a lawsuit filed against the PGA Tour over its decision to suspend players who participated on the new circuit. Eight LIV golfers – including Phil Mickelson and Ian Poulter – have removed themselves from the case.

A vocal opponent of the new series, McIlroy has maintained there will always be scope for “peace talks” between the tours, but warned that now is not the best time to engage in such dialogue.

“Right now with two lawsuits going on, and how heightened the rhetoric has been, I think we just need to let it cool off a little bit,” he said.

“I’ve probably said a few things that are maybe too inflammatory at times, but it just comes from the heart and how much I hate what this is doing to the game.

“It has been an ugly year [but] there’s a solution to everything.

“If we can send rockets to the moon and bring them back again and have them land on their own I’m sure we can figure out how to make professional golf cohesive again.”

As it stands the circuit is not recognised by the OWGR, meaning participants are at risk of sliding down the world rankings and consequently missing out on entry into the sport’s four majors and qualifying for the Olympics.

“The only ones that are prohibiting them for getting world rankings points are themselves,” McIlroy said.

“It’s not as if they [the OWGR] created this criteria out of thin air a few months ago to try to prevent LIV [players] from getting points.

“I think if they were to pivot, have cuts, have a minimum field of 75, have more of a merit-based system where there’s a meritocracy for how to get on the tour… there’s a bunch of stuff where they don’t meet the criteria yet, but if they were to change and meet all those points then there’s obviously no reason not to give them world ranking points.

“I’m certainly not for banning them from majors, but my only thing is with the way the world rankings are now, if someone that hasn’t won the Masters before can’t garner enough world ranking points to be eligible, then I think that’s entirely on them.

“They knew the risks going in, and actions have consequences.

“That was a risk that they were paid for ultimately. If some of these guys that don’t have exemptions in the majors don’t qualify for them, I have no problem with that because they knew that going in.”