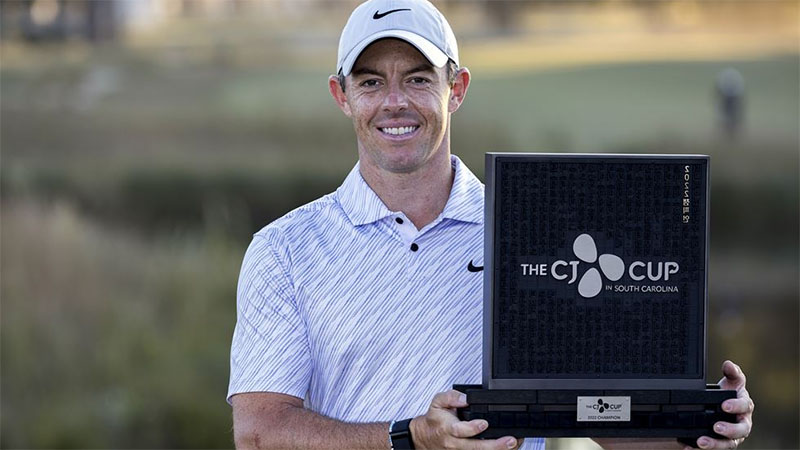 The Northern Irishman claimed a one-shot win at Congaree Golf Club, shooting a four-under-par 67 to finish the tournament on 17 under.

American Kurt Kitayama also hit 67 on Sunday, and briefly drew level with McIlroy thanks to a birdie at the 12th.

However McIlroy made three straight birdies of his own to pull clear.

“It means a lot,” said an emotional McIlroy after claiming his 23rd PGA Tour win.

“I’ve worked so hard over the past 12 months to get myself back to this place. I feel like I’m enjoying this game as much as I ever have.

“I absolutely love the game of golf and when I go out there and play with that joy, it has definitely showed over these past 12 months. It feels awesome.”

Holding a one shot lead coming into the final day, McIlroy knew a win would take him above Scottie Scheffler and to the top of the world rankings for a ninth time.

A second place finish would also have seen him leapfrog Scheffler, because the American finished in a tie for 45th on one under.

For McIlroy, birdies at the 14th, 15th and 16th holes gave him a three-shot cushion over his closest rival Kitayama.

The lead allowed the four-time major winner to come home in relative comfort despite bogeying the last two holes.

“It’s a big achievement, I’m really proud of myself right now,” he continued.

“The journey of trying to get the best out of myself, that’s the satisfying thing. Now it’s all about going forward and trying to just keep this going.

“I never feel like I’ve figured this game out, I don’t think I ever will figure it out, but every day I wake up trying to get closer.”

The head of Golf Saudi clarified recent comments regarding the possibility of LIV Golf creating its own major championships.