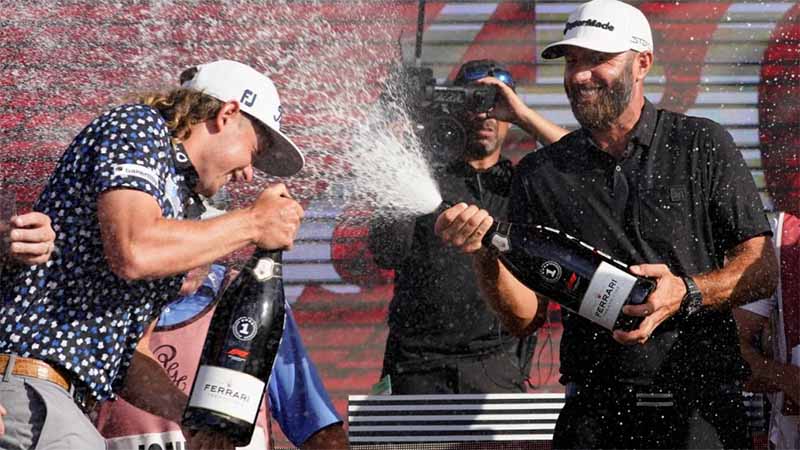 The madness of modern‑day golf can be summed up by Cameron Smith. In 2022, the Australian has claimed the Players Championship and a Claret Jug. His competitive year closed on the outskirts of Miami, where his Punch side were edged out of LIV Golf’s team championship by 4Aces. A golf world shrugged shoulders.

The victors were showered in champagne on the final green, representing a dubious irony. They should try that trick in Saudi Arabia, from where the money supporting LIV’s disruption plan has emanated. Smith scored a 64 to prevail at St Andrews in July. David Feherty, one of LIV’s appointed shills, screamed that a 65 here had to be among the finest rounds of the Australian’s life.

For the 4Aces, $4m (£3.45m) each. A total of $34m was distributed on day three at Doral. Dustin Johnson, Patrick Reed, Talor Gooch and Pat Perez took the largest share of that. Smith and co must settle for $2m per person.

On a day where aggregates counted, Smith’s seven under par was offset by Marc Leishman’s 74, a 70 from Matt Jones and Wade Ormsby’s 73. Johnson and his three chums all shot under par. Johnson has pocketed $35.6m from on-course LIV pursuits in 2022. “The whole season just got better and better,” Johnson said. Too right it did. The YouTube viewing audience hovered around 60,000 as players jostled on the closing stretch.

LIV may regard this as a success for a startup business but the underlying sense is that a free-to-air product – it is also available via their own website – has not captured the imagination of the sporting public. Highlights of the All Blacks against Japan in Tokyo on Saturday yielded 585,000 hits on YouTube alone.

Not that the scene was entirely worthy of ridicule. Not quite. The galleries at Doral – especially in respect of following Smith and Johnson – would be more than acceptable for any mainstream tour event. The level of golf itself was impressive. It just felt as if nobody looking on really contemplated or cared about the bigger picture that LIV has tried so hard to push.

Ari Fleischer, a former White House press secretary, patrolled the scene. So, too, did leading members of Saudi’s public investment fund. A bomb scare halted play for 15 minutes at the 14th, during which time security services had to complete a sweep of the hole. Outside the gates of Doral, a lone protestor held aloft a banner which read: “Trump’s lies and LIV golfer greed allows Saudi Govt to sportswash crime.”

Those inside the compound – including agents, who have benefited more than most from this scheme – look the other way but the ease with which the kingdom has breezed into the upper echelons of this sport remains concerning.

Phil Mickelson was an onlooker, his Hy Flyers having endured earlier elimination. He took to the broadcasting booth, where he reflected on an “awesome” introduction to LIV Golf. “So much fun,” the six-time major champion said.

Mickelson’s situation remains the most preposterous of all, given his infamous comments relating to the “scary motherfuckers” he is now being paid by. Mickelson has lost sponsorship and even had to skip events celebrating the 150th anniversary of the Open. And yet, we are all expected to believe life is a bed of roses.

The Stingers quartet of Branden Grace, Charl Schwartzel, Hennie du Plessis and Louis Oosthuizen exited Doral with $1m per person. Which is hardly bad for a combined 10 over par. Grace shot 80.

As this was unfolding, Jordan Smith was signing for a 63 to win the DP World Tour’s Portugal Masters at an eye-catching total of 30 under par. Players in that domain will spend the coming weeks scratching to save or earn tour cards. The dollar signs will suggest otherwise but somehow this still feels more significant. LIV has reached the end of year one – an achievement in itself – but with questions swirling about the competitive value of what they have created.