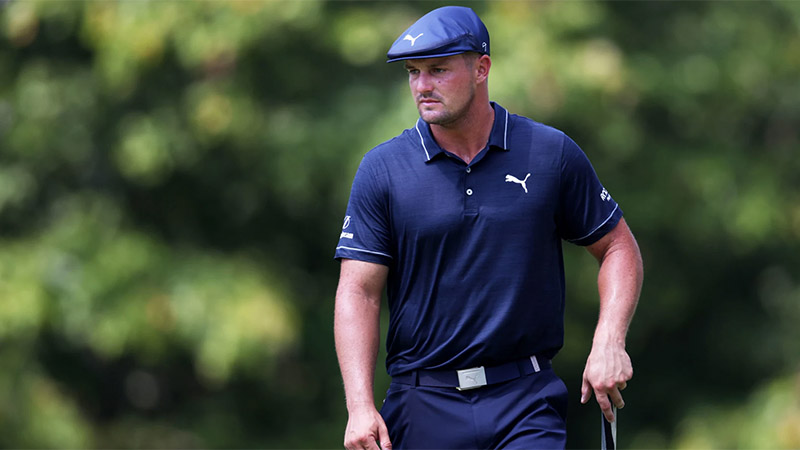 Over the weekend, LIV Golf enjoyed its season-ending championship event in Miami, where the Tour’s team-style format was showcased during its inaugural playoffs.

The event took place at the Blue Monster at Trump National and each team had a chance to come away with the victory in this knockout format.

Captains Bryson DeChambeau, Dustin Johnson, and others were looking to guide their team to the championship and the massive $16 million prize; all part of an eye-opening $50 million total purse for the season finale.

However, despite the massive amounts of money that LIV dishes out to its members, players like DeChambeau and Watson are still seeking a payday from their former employers.

Bryson DeChambeau and Bubba Watson continue the feud with PGA Tour.
Bryson DeChambeau, alongside fellow American Bubba Watson, recently spoke out against Jay Monahan and the PGA Tour claiming that they are still owed the second half of their PIP money.

For those who are unaware, PIP stands for ‘Player Impact Program’, where golfers are given additional money for their overall impact on the sport, including their impression on fans. The PGA Tour awards $40 million to its top PIP finishers.

After receiving his first payment back in February, DeChambeau says that he is still owed a whopping $1.75 million from the PGA Tour and after waiting so long for the next installment, Bryson has gone on record claiming that he is fed up with the behavior of his old Tour.

“It’s not about the money; it’s about the principle. It’s the way you deal with situations.” – Bryson DeChambeau

Furthermore, he claims the PGA Tour prevented him from fulfilling the second part of the requirement to receive the payment, his participation in a charity event.

“They said because you’re not in good standing, we’re not allowing you to do something to help out junior golf and junior golfers. To me, that’s childish. It just shows where they stand emotionally. I respect and understand it, but when you’ve completed something and provided entertainment for them last year, that’s the reason I’m in the lawsuit.”

Meanwhile, Bubba Watson, who finished 10th in the PIP standings, says that he is still owed an additional $3 million. However, at least so far, he hasn’t received payment either.

The PGA Tour has yet to comment on the matter, but it’s obvious that they are playing hardball with their former stars since their defection to LIV Golf.

Others who finished in the PIP top 10 included Phil Mickelson ($6 million), Dustin Johnson ($3 million), and Brooks Koepka ($3 million). It remains to be seen if they all have received their full amount yet or not. Tiger Woods was the eventual top finisher on this list and he took home a cool $8 million.

So the question now is whether or not the PGA Tour can legally withhold payments to Bryson, Bubba, and whomever else.

It seems as though there are so many disputes and lawsuits between the rival tours that this PIP payment issue may not be resolved anytime soon. Both sides have been dragging their feet for months, so if I were DeChambeau and Watson, I wouldn’t be expecting a check anytime soon.

In the meantime, both players will have to settle for the large amounts of money that LIV continually dishes out to them.