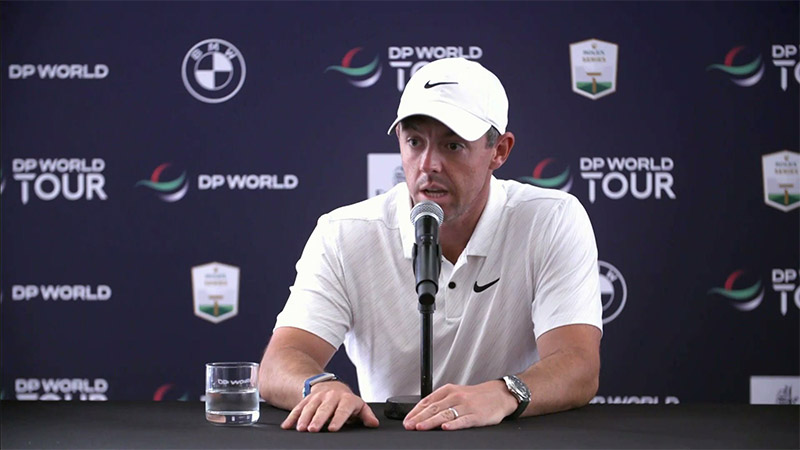 Rory McIlroy: “I think he [Norman] just needs to exit stage left. He’s made his mark but I think now is the right time to sort of say, look, you’ve got this thing off the ground but no one is going to talk unless there’s an adult in the room that can actually try to mend fences”

Rory McIlroy has called on Greg Norman to leave his role at LIV Golf to get an “adult in the room” to help end the “stalemate” in the dispute between golf’s tours.

McIlroy has been a loyal supporter of golf’s established tours in their legal battle with the Saudi-funded breakaway circuit, with the world No 1 believing it may take chief-executive Norman exiting LIV Golf to get any resolution within the sport.

“Nothing will happen if those two things [lawsuits] are still going on,” McIlroy said ahead of the DP World Tour Championship. “You’re limited in what you can do. Then I think from whatever happens with those two things, there’s a few things that I would like to see on the LIV side that needs to happen.

“I think Greg needs to go. I think he just needs to exit stage left. He’s made his mark but I think now is the right time to sort of say, look, you’ve got this thing off the ground but no one is going to talk unless there’s an adult in the room that can actually try to mend fences.

“If those two things happen, then things can happen. But right now, it’s a stalemate because there can’t be any other way. Hopefully something can happen, who knows.

“Whether that’s in the hand of a court or a judge or something else happens along the way, no one really knows. But right now it seems like it’s a bit of a stalemate.”

Norman said in an interview earlier that “every PGA Tour player should be thanking LIV” because of the increases in prize money and the Player Impact Program [PIP], signalling out McIlroy and Tiger Woods, although McIlroy rebuffed suggestions that the likes of he and Woods should be grateful of the rival tour.

McIlroy explained: “Am I thankful that it’s provided more opportunities for the top players to earn more? Yes. But ultimately will that make me happier at the end of my career? No.

“Tiger is the reason that the stature of our game is where it is. The generation of Tiger and the generation coming after Tiger have all benefited from him and his achievements and what he’s done for the game of golf.

LIV Golf announced on Monday that Australia will host an event next April as part of an expanded 2023 schedule, with McIlroy expecting more conversation about the golf next year as opposed to player moves and disputes.

“I don’t think we will have another year like this one because all of the noise has been about who is jumping ship, who is going where, who is staying, who is going,” McIlroy added.