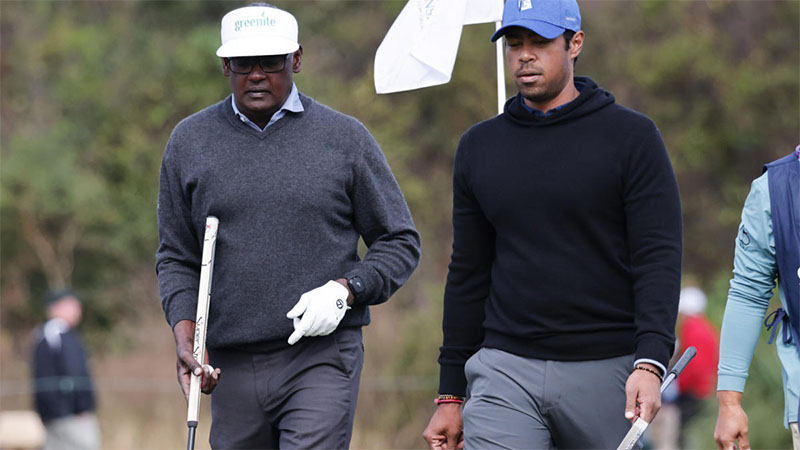 The Singhs became the first pair to shoot below 60 in both rounds, as they claimed a two shot victory

In their 16th appearance at the PNC Championship, both Vijay and Qass managed to make it over the line, with the father-son duo posting two consecutive rounds of 59, becoming the only pair to ever do so in the tournament’s history, to secure their maiden title.

Heading into the final day, the main talking points surrounded both Charlie and Tiger Woods, and Justin and Mike Thomas, with the latter leading by two shots at Ritz-Carlton Golf Club Orlando from Team Woods and Team Singh.

Being a Scramble format, there were plenty of opportunities for teams to go low and, after 12 holes, it was defending champions John Daly and John Daly II who actually led, with the pair carding 11 birdies in 13 holes.

Despite eagling the last hole, a run of pars through the middle of the back nine stalled any momentum, with their 24-under-par total becoming the target for those chasing down the Americans.

Many predicted that Team Thomas and Team Woods would be battling it out for victory, but their disappointing back nines led to Team Singh ramming home the advantage and, with an eagle at the 14th, a birdie or two would almost guarantee the title.

Throughout the day, you could say that Qass had been the main provider and, at the 16th, a near holed wedge from Qass put them one up with one hole remaining.

Having to hole his approach shot at the last to force a playoff, Justin Thomas was unable to convert from the fairway, as the trophy landed in the hands of Team Singh for their first victory in 16 years.