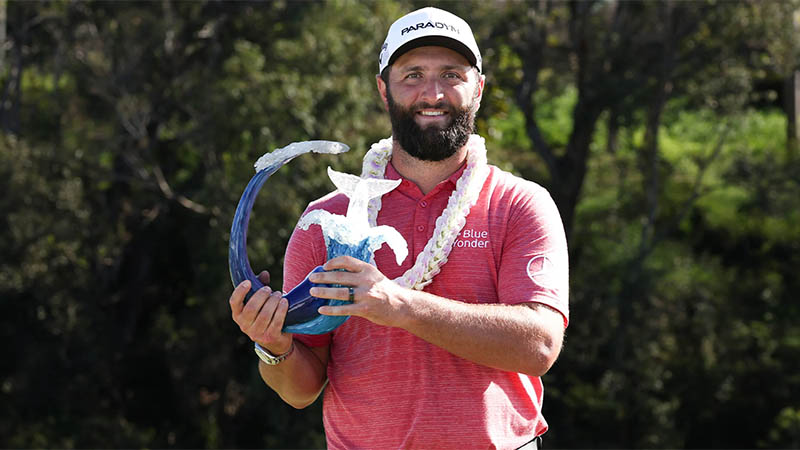 KAPALUA, Hawaii – Like a raging bull, Jon Rahm charged from behind to steal the 2023 Sentry Tournament of Champions.

Rahm made nine birdies and an eagle on Sunday to shoot 10-under 63 at Kapalua Resort’s Plantation Course and rally from as many as nine strokes behind during the final round to edge 54-hole leader Collin Morikawa by two strokes.

A year ago, Rahm shot 33-under but was pipped by a stroke by Cameron Smith, his second runner-up finish at the TOC, and this time his birdie count was almost as plentiful as the pineapples that used to grow on the hillside layout. He signed for a 72-hole aggregate of 27-under 265.

“To come back this year and shoot a very low score again, I mean, I’m what, 60-under par in these last two tournaments?” he said. “It would have been tough to shoot that low twice and not win it. So I’m glad I had the chance and I’m glad I did it.”

The 28-year-old Spaniard took advantage of Morikawa’s series of back-nine blunders to earn his eighth PGA Tour win. Morikawa, a two-time major winner who was bidding for his first win since the 2021 British Open, tied the largest 54-hole collapse in PGA Tour history after he entered the final round with a six-shot advantage. It was a shocking turn of events as Morikawa played the first 67 holes bogey-free and tacked on three front-nine birdies on Sunday to extend his lead to as many as nine. But he bladed a bunker shot over the green at 14 that led to his first bogey of the tournament, chunked a pitch at 15 and added a third straight bogey at 16.

“The game felt so easy for so long and now no matter what he does it seems like it doesn’t work out,” said PGA Tour Radio’s Mark Wilson.

Morikawa joined a dubious list of nine players who have squandered a 54-hole six-shot lead in Tour history: the first to do so was Bobby Cruickshank at the 1928 Florida Open, while the most-recent was Scottie Scheffler at last year’s Tour Championship.

“Sadness,” Morikawa said of how felt after shooting a final-round 72. “I don’t know. It sucks. You work so hard and you give yourself these opportunities and just bad timing on bad shots and kind of added up really quickly.”

Rahm held a share of the first-round lead with Morikawa after carding a 64 but shot himself in the foot on Friday, shooting 71 and was mad enough with his putting performance that he kicked a trash can on his way to scoring. He was being left in the dust on Saturday, making just one birdie on the front nine when his caddie Adam Hayes stepped in and gave him a pep talk.

“He had hit a real poor shot for him on nine,” Hayes said. “I could tell he wasn’t that focused. I said to him whatever you do on the next 27 holes be uber committed and really clear on picking your start lines, picking your finish lines and be really committed to a number and that’s what he did. He hardly missed a shot after that.”

Rahm reeled off five birdies to shoot 67, but trailed by seven and figured, “we’re going to need a small miracle.”

Then he made a bogey at the first hole on Sunday. “I was going to need somewhat of a larger miracle,” he said.

The epic comeback began with a birdie at the second as Rahm’s putter heated up — he ranked first in Strokes Gained: putting for the week — and made five birdies in all on the front. Still, he trailed by six at the turn before what look to be a walk in the park for Morikawa turned into a Stephen King horror movie. Rahm’s rally was aided by a 5-under stretch thanks to three consecutive birdies starting at No. 12 and an eagle at 15.

“You need a combination of both. Me having a really good day, which I did, and Collin not having his best,” Rahm said.

Counting his success on the DP World Tour, Rahm has registered three wins in his last four official starts, and the victory in Maui could be the launching pad to a big year.

Adam Scott confirmed that he will not join LIV Golf